JournoNews chats with Chris Griffiths, CEO of ThinkBuzan and author of ‘GRASP The Solution’, a refreshingly pragmatic approach to making decisions and solving problems creatively.

What prompted you to write ‘GRASP The Solution’?

Essentially, it was a lifelong study into modern brain based strategies that, bit by bit, led to my desire to write the book. Over the years, I’ve applied strategies based on how the brain works in all the companies I’ve been involved in.

For instance, at Birchfield, where our educational products were in 80% of UK secondary schools, we didn’t focus just on the content, we focused on the delivery of the content to students and the impact it had on the brain.

The more I delved into the subject and tried out different strategies, the more I came to realise that, while there are lots of tools out there that can help you be more creative and productive, if you happen to use them in the wrong context or frame of mind, they aren’t anywhere near as effective as they should be.

I liken it to a world-class chef. A great chef can have all the best utensils and equipment in the kitchen but without the right ingredients, they aren’t going to be able to create something special. So ‘GRASP The Solution’ came about as a way of putting things into a context and looking at what stops people being creative as well as what makes people be creative.

Unfortunately, a lot of people don’t realise it’s the barriers they impose on themselves that prevent them from coming up with really great ideas and no matter how many tools they use, if they’re using them in the wrong way, in the wrong mindset, they aren’t going to work!

Describe the essence of the book.

The whole spirit of this book is about providing both the context and application for thinking creatively. You need both elements to solve problems and make decisions innovatively using optimal brain processes.

In brief, the book is there to help you deliver what I call ‘practical creativity’. It’s about putting a system and process behind creativity so you can come up with the right ideas and solutions to your challenges, and actually make them happen in the real world.

Give us some examples of how a company can sadly be left behind by ‘insisting on doing things the way they’ve always done them’.

When people and companies base their forward direction on previous experience, and experience that’s worked well, they’re not necessarily innovating. If they solve a problem in the same way that they solved it before – that’s great, they’ve solved the problem. But have they moved forward? Have they innovated? Have they created something new?

Real success in business relies on you doing things differently in a way that customers like and respect. A new design, a new product, a new initiative doesn’t come from doing things the same way. Look at how Apple was able to use its creativity and design to become the largest capitalised technology company in the world. Apple didn’t follow the norm, it went after the ‘new and different’ with spectacular results.

In your engagements with business owners around the world, what are the main challenges they face in successfully getting their message about their products and services ‘out there’, especially now that society is saturated with multi-channel media – online, in print and TV.

Creativity is fundamentally about doing things differently so that you stand out from the crowd. I believe the main challenge that companies face today is a standardisation in pricing and product worldwide.

Pricing won’t differentiate you, but good design will. Good design comes through creativity and creativity comes through applying an effective system and process, such as the one I put forward in my book – the GRASP The Solution system.

Which industries, in your opinion are using multi-channel media to spread their ideas and messages successfully? Why?

The industry that immediately comes to mind is technology. Technology companies are doing a great job of using multi-channel media, especially the internet to get their messages across. Again, Apple stands out as an example of a company which uses different forms of marketing – TV, websites, social media etc – in a simple yet strikingly innovative and coordinated way.

Do you reckon most companies don’t devote enough time and energy to coming up with fresh ideas on how to do things differently?

There are lots of surveys coming out that reveal creativity and new ideas as a top priority in business. For instance, in a global IBM study of 1,500 CEOs and senior executives in 2010, creativity was identified as the most crucial factor for future success.

Another survey by the Boston Consulting Group in 2009 showed that two-thirds of senior executives placed innovation as one of their top three strategic priorities. However, when asked to rank the initiatives they were most happy with in terms of return on investment, innovation didn’t figure anywhere! It was one of their top priorities but they couldn’t deliver on it.

I think this is because executives have this idea that they can just be innovative, they don’t actually have a system or process in place to structure their innovation approach. They’re not actively committed to it.

Over the years, as you’ve worked with teams from businesses around the world, how much time on average do the successful ones spend brainstorming to come up with that ‘killer idea’?

They’re focused on productivity and speed nearly 100% of the time. It’s all reactive thinking. Many business strategies at the moment are about speed, reacting to events, fixing problems and not actually strategising. I don’t think this is right.

Is business a sprint or a marathon? I personally think it’s more of a marathon. You’ve got to pace yourself and think things through, figure out where you’re going and how you’re going to get there. Most people in business spend their time sprinting, yet one thing’s for sure – you’ll certainly never win a marathon by sprinting!

Give us an example of a group of people you know who totally transformed their thinking to come up with a totally different way of doing things – what did they do before that wasn’t working and what steps did they take to change things?

A while ago, we consulted for a really successful PR and Marketing company, one of the larger ones based in London.  I found it fascinating to observe how a group of very different kinds of people actually operated. You had some people who could come up with ideas really quickly – they wouldn’t do any analysis, they would just go with their gut feel and in the end they spent a lot of time backtracking.

There were others who struggled to generate any ideas. And there were still others who were mis-matchers, all they could see were problems and obstacles. It was a very varied group but by putting together a system to help them facilitate their creativity based on GRASP principles, they were able to successfully and easily create new strategies, not just for themselves, but for their clients and customers. 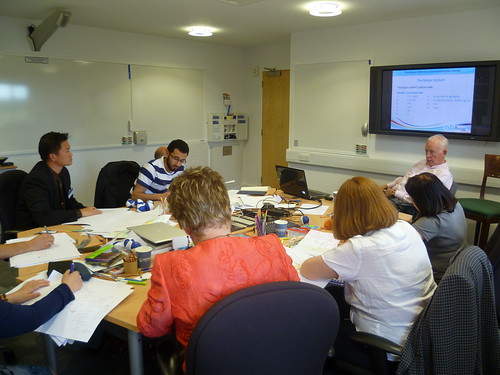 The individuals who attend our ThinkBuzan Licensed Instructor (TLI) courses often have many realisations as they go through their training. There was one particular person who really wanted to set up his own business but he was becoming frustrated because he didn’t know what kind of business to start up. Within two days of working with him, he pretty much created a whole business plan and was beginning to move it forward.

What keeps your own thinking fresh and stimulated?

Focused daydreaming. And making sure I’m in the right environment at the right time to do my thinking. If I want to come up with really good, useful ideas I pay close attention to how I’m thinking, taking care that I’m not being reactive or selective in my thoughts.

You travel a lot, consulting and speaking across the globe, what do you do to maintain a sense of ‘balance’ whilst you’re on the road?

As CEO of ThinkBuzan, what do you believe are the crucial qualities required to lead teams effectively?

To lead teams effectively you’ve got to have several different qualities. I think the leaders of the 21st century are those that can really innovate, therefore they can be stronger leaders with respect to taking a company forward in its strategy. I think a good leader has to be a good follower too. How can you lead effectively if you don’t know how to follow?

A good leader has to gain the respect of their team. One of the things that many business owners or senior managers don’t realise is the positive power of thinking about their team’s thinking. At ThinkBuzan, we try and make the environment for people as enjoyable and relaxed as possible.

As a leader, I like to work with friends and it goes without saying that people enjoy working with friends. At times a leader has to be dictatorial but most of the time I think they shouldn’t be. You get better results by treating people like people and letting them run with the ball.

Things you love about Cardiff Bay, where ThinkBuzan is based?

Being near the water. I like the fact that Scott Harbour where we’re situated is where Captain Scott of the Antarctic set off on his expeditions.

Favourite overseas city to work in or visit?

I love visiting Singapore. It’s a great example of how a creative and innovative mindset leads to the success of a nation.

One thing people might not know about you is …

Work aside, what do you love to do to unwind?

I have two favourite restaurants in Cardiff Bay – Signor Valentino’s and Garcon.

The United States. I was born there so I love to visit whenever I can.

My on-going goal is to help millions of people stop to think about their thinking and help them become more productive.

We are what we think and if I can do my little bit to help people think better, then they will be better. The more we can innovate, the more we can progress. This is something we need to get across in our schools and to our children. It upsets me that schools still don’t teach children how to innovate or how to create.

We see creativity continuing to diminish with age and this doesn’t have to happen. I hope to play a part in changing this.

Connect with Chris Griffiths on

Royal Mistresses of the House of Hanover-Windsor

‘Off the Cuff’ with Katy Faust

"To live our lives and miss that great purpose we were designed to accomplish is truly a sin. It is inconceivable that we could be bored in a world with so much wrong to tackle, so much ignorance to reach and so much misery we could alleviate."

A Story About Syria, Israel and the Power of Mercy